Mycoremediation is the use of fungi to improve, fortify, rehabilitate, or sustain the health of an ecosystem or industrial area, as well as break down waste components generally. Mycoremediation in combination with forestry is one of the many possibilities, and has clear potential in being a more general aspect of the industry in the future.

What is the idea for the mycoforestry work? 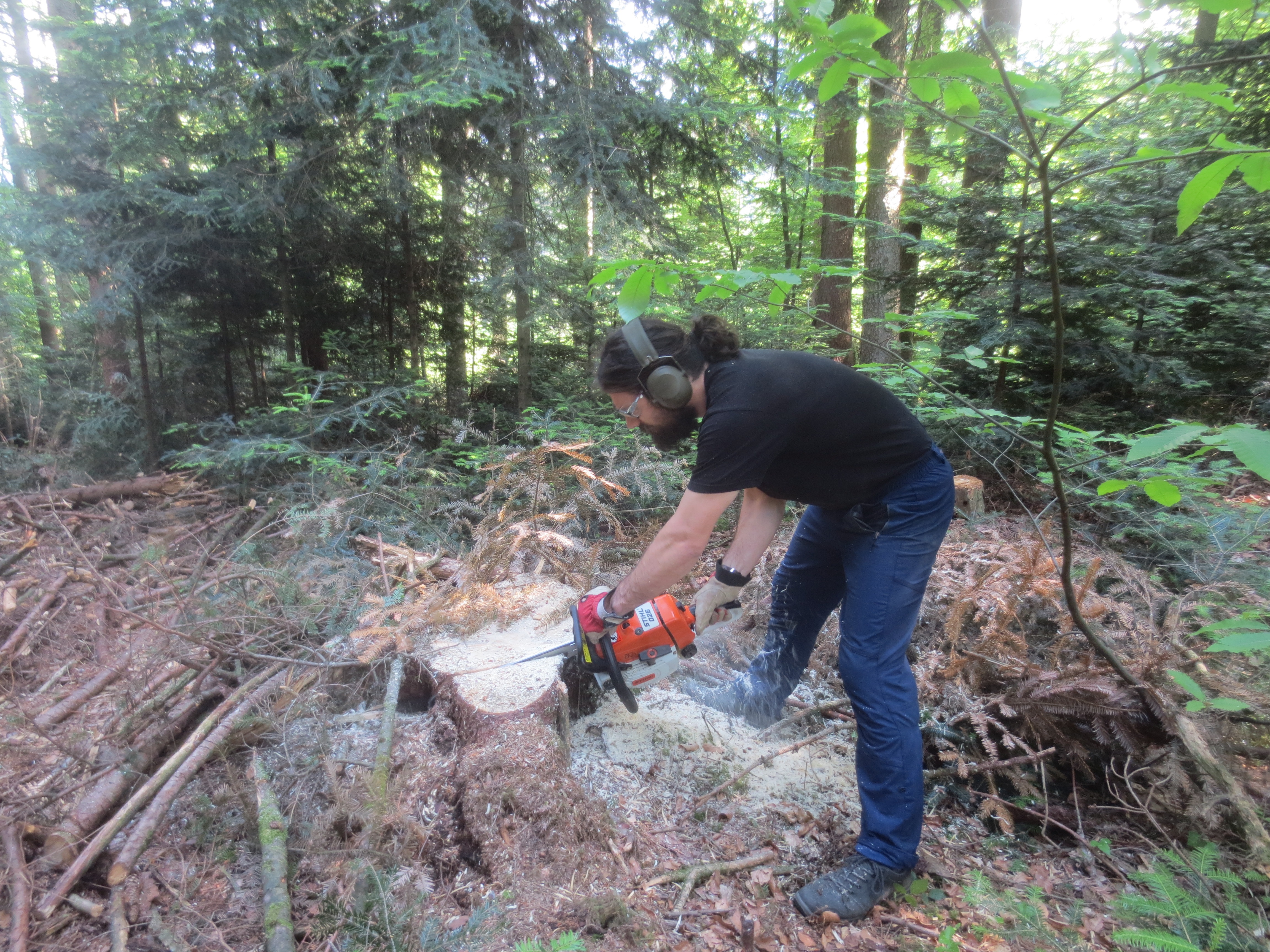 In forestry alone, there are many ways to ally with fungi. One common was this is done is by intentionally inoculating the roots of young seedlings with mycorrhizal fungi, especially when the seedlings come from nurseries with more sterile soils. The idea we are interested in is the inoculation of leftover wood from logging operations with saprophytic fungi through the use of sawdust, compost, and dowel spawn applied via holes or wedges in the wood or mixed into wood chips or terrestrial debris.

What are the benefits?

The intentional inoculation of saprophytic fungi can be very beneficial for a few reasons. If the wood becomes colonized by a benign saprophyte, there is less chance of the wood becoming colonized by a parasitic fungus like Armillaria spp or Heterobasidion annosum. The problem with these parasites is that they can eat dead wood and then once they have established themselves can move to living trees in the area and begin killing them. Most of these wood saprophytes are direct competitors of these parasite species, and some have been shown to potentially attack and kill off the parasites. By using these inoculation techniques then, foresters will have less need for resorting to chemical applications such as urea to try and prevent parasitic colonization to stumps. And on average, the wood would then become decomposed faster than waiting for other decomposing fungi to colonize them, allowing the nutrients to cycle back into the soil more readily.

Which species will be used?

The idea is to use only fungi that were collected from the region and then grown as spawn at our facility. This way, there is no introduction of foreign species or strains into the forest. The fungi are already acclimated to the climate since they were collected from here. All of the fungi will either be medicinal mushrooms and/or mushrooms found on the Swiss Marktliste. This way, even if the foresters themselves don’t want to harvest the mushrooms, local foragers can collect them. In regards to the species, many specialize in certain types of wood and so we have species for nearly all type of trees. We pay attention to the substrate they were found on to select what kinds of wood they will be used for in the projects and then train the strains in our facility for those future applications. Below are some examples of species we have collected and begun growing.

Trametes versicolor (Schmetterlings-Tramete) - This mushroom is one if the most common wood saprophytes and quickly colonizes stumps, logs, and large branches. It is found on nearly every type of hardwood and is a common medicine in the form of teas, tinctures, and powders.

Sparassis crispa (Krause Glucke) - One of the most loved wild mushrooms due to its size, taste and texture. It is found at the base of stumps of many types of trees, depending on the strain. Some grow on conifer wood(pine, spruce, etc), while others are on hardwood(oak, etc).

Hypholoma capnoides (Rauchblättriger Schwefelkopf) - This edible mushroom produces large clusters primarily in late fall on spruce stumps, making it a great candidate, since not many of these edible saprophytes are very fond of spruce.

Pleurotus ostreatus/pulmonarius (Austern-Seitling, Lungen-Seitling) - These popular mushrooms are found on many hardwoods, and sometimes conifers as well. They can readily colonize large logs and branches as well as stumps.

Fomes fomentarius (Zunderschwamm) - This polypore grows on birch, beech, and spruce and can produce huge fruiting bodies which are traiditonally harvested for their felt and their medicinal qualities.

Auricularia auricula-judae (Judasohr) - This mushroom tends to grow on elder trees, though I am growing a specimen which I found on beech. It is well-loved for cooking, especially in Asia and dries easily.

Flammulina velutipes (Samtfuss-Rübling, Winterpilz) - This mushroom produces clusters on stumps and dead hangs, usually during the winter months. It can be found on many types of hardwoods and conifers.

Lepista nuda (Violetter Rötelritterling) - A common compost mushroom, it is found on forest floors where it eats dead leaves and other debris. It can be inoculated into wood chip mixes.

Why do we want to inoculate your forest?

The potential in this type of mycoremediation is huge, and at the moment, it is primarily done be private foresters and gardeners. We want to see an industry develop so that in the future, most foresters will in incorporate saprophytic inoculation into their practices. Not only does it help create a more healthy forest, it also creates more mushrooms for locals to gather.
We have received a grant that allows us to do some pilot projects for foresters in the hopes that more will hear of and be interested in these ideas so that an industry can slowly develop in Switzerland and beyond. We want to help that get started.

How does it work?

Stumps and logs should be inoculated beginning one or two weeks after cutting to wait for the antifungal properties of the wood to get out, and should be done no more than a month or two after they are cut before they start getting colonized by other organisms. In the case of sawdust or dowel spawn, holes are drilled into the wood using an angle grinder, which is fast but needs an electricity source, or small drills, which are battery-operated but are slower. Holes are then usually sealed with wax. Another method is to cut a wedge into the wood and fill it in with sawdust spawn before replacing the cut piece. Yet another method that can be employed it to colonize rope which is then fit into grooves cut into the wood. For wood chips and leaves, sawdust and/or wood chip spawn is mixed in and then spread. Cardboard sandwiching can also be incorporated to help the mycelium colonize more rapidly.
Depending on the fungi and wood size/species, it may take between one and five years before any fruiting bodies actually form on the inoculated wood. We will come back periodically to monitor the site and keep updates to get a good idea of success rates. This way, we can get a better idea on what works, in what ways this can be incorporated into forestry, and what it takes to make ecological and economical sense.

If you are interested in working with us, please send an e-mail to mycomarny@protonmail.com. Depending on the size of the proposed project, we will need 2-5 months advanced notice in order to make sure we have enough spawn on hand. It is best to inoculate in the spring when frost is mostly over but the wood still has a lot of sugars inside. However, summer and early fall is also an option.